Back to a more reality soon, a more vivid reality

So, after this week, which is national Children's book week in Sweden, as well as Rights of the Child week (coincidence? coordination, I do not know), I will be traveling back to the USA to visit my family and celebrate Thanksgiving.

And then after my trip, I'll be in my last month at the library. My last day of my maternity cover is December 30th. In January, I am back to my job as a fritidspedagog at a wonderful local primary school. It's literally right across the street from the library, so not too far to come back for books and to see my friends here.

So, what is a fritidspedagog, you might ask? There is not a real equivalent job in the States, because we didn't really have any real regularly planned after school programs in the 1980s when I went to primary school. We took the bus home and I had my grandma home and other children on my block had either moms or babysitters home to greet them. Nowadays, I guess they have after school teachers, but judging from the scant information I've seen on these jobs, they do not require a higher education or any kind of formal training. Nah, a fritidspedgog is more like an afterschool librarian, offering planned creative and fun more informal educational activities.

Since I've been working as a fritidspedagog, I have fallen head over heels in love with teaching. The ongoing and continual contact with the students is a gift. Being along for the journey and being a guide in the children's ongoing development is the most rewarding job I have ever had. I will absolutely take my 5 years of library experience with me to help students develop their love of reading (or to start that process), but starting in January, I'll be working more as an educator and less as a librarian in the traditional sense.
Posted by A.Johansson at 12:18 PM No comments:

Today is All Saints Day in Sweden, and the library is closed. We don't really celebrate All Saints Day in America, but Latin Americans do celebrate Dia de los Muertos or day of the dead. So, I guess we 'Murricans bastardized it into Halloween. It's kind of a leap how honoring ones long gone loved ones morphed into costumes and trick or treating, but what can I do about it?

Anyway, the Swedes have drunk the Halloween Kool-Aid so to speak, so we had a really fun haunted house (spökvandring) at the library where we turned the basement auditorium, periodical room and archived books rooms into a haunted house that visitors wandered through.

This week I also invited the second-graders from the school I normally work at to listen to a Halloween story hour. Although I was kind of sick, my hoarse witch voice worked and I found some great shortish funny, scary and really scary ghost stories to read. I turned out the lights in the children's section, lit LED candles and read the stories with a flashlight. These things made the atmosphere cozy and spooky. Super fun!
Posted by A.Johansson at 7:00 AM No comments:

I remember when my grandma used to do the lists for the take-away preschool book bags. She put a lot of thought into them, and wrote the lists neatly up by hand (it was the 80s and she had lovely penmanship-a lost art). I'm sitting here and doing our book bags for the drop-in nursery school in our community (öppen förskola), which is for parents to attend with their babies who are too small for state-run nursery school and often their older siblings (who are not eligible for enrollment in state run nursery while their parent or parent is on ma/paternity leave).

I'm checking out the books on my computer in my office and saying aloud the name of the books and authors like the announcement lady at the Academy Awards. I clearly need to go outside and be social haha.

Posted by A.Johansson at 5:25 AM No comments: 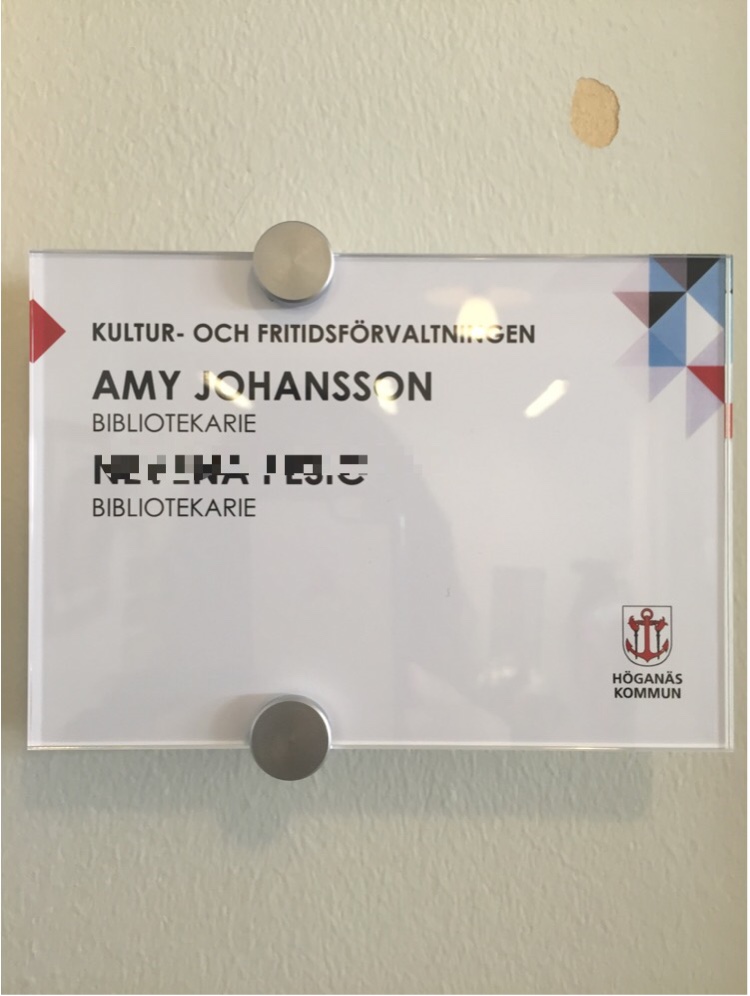 I blurred out my co-worker's name to protect her privacy. She is also a non-Swede, who grew up & educated in Southern Europe. It's fun to hear about her experience in library school and as a librarian in her native country. International perspective brings a fantastic texture to workplaces, especially cultural institutions.

Public Relations in Manhattan to Librarian in Höganäs

Yes, I was a publicist, a long time ago (1998-2008) and in a galaxy far, far away (Manhattan), but admittedly my heart was never really in it.. Sure, it was glam, sure I hobnobbed with the upper eschelons of media celebrity, sure I worked with household names,  and sure I have some stories to tell and gossip to spill (it will all be artfully covered in my memoirs one day), but I prefer my life the way it is now. In late 2007, I discovered that I was expecting my first child. It was admittedly a happy surprise, as I hadn't really planned on getting pregnant at that point, but was thrilled with the idea of starting a family. I did know that I needed to change careers though.

Late night events, journalist dinners, press junkets, being at the beck and call of my clients, I knew  that this wasn't the kind of motherhood I wanted to have. I wanted to change careers, but to what?


So, I did what I normally did in those days, I called my oracle, my idol, my Yoda and my best friend: my amazing late grandmother Rose. Rose had been a diplomat's wife and had accompanied my grandfather on his consular posts in Latin America during the second world war. Rose was also trilingual (English, Spanish & Portuguese-she picked up languages whilst living abroad) and loved to read. She had graduated first in her class at Erasmus Hall High School in Brooklyn (Barbara Stresisand was an alum there too, but not the same year of course) and she wasn't satisfied with the idea of being a lady who lunched/Diplomat's Wife. She wanted more. So she started by working as a translator and bibliographer with the War Effort. And when they returned to the States, Rose attended Columbia University (at that point they had a masters program in library science) and got her degree in library and information science. She had been working as a librarian ever since. Even after she retired, she still worked 9 hours a week at East Brunswick Public library in the children's section, as it brought her great joy. She loved her job. "You should be a librarian. You'll not regret it" was her advice.

Although I had strongly considered studying early childhood education to become a reading specialist, I was not thrilled with the idea of the American education system (the tyranny of the Core, of pushy American compitiparents) I knew that she was right. Besides, I could take some educational courses in my library degree. She knew me better than anyone. El Sueco, the other person who knows me better than anyone agreed wholeheartedly. I found that Queens College of the City University of New York was accepting late applications for the library & information science program that started in January, 2008. I applied and got accepted. I completed 2 terms of study, gave birth in late summer (my contractions actually started during a cataloging class!) and took the fall term off. I returned to work as a news archivist and librarian at WABC Eyewitness News in 2009 and finished my degree in 2010. Sadly, my grandmother was too frail after a stroke to attend my graduation. But she did give me her Dewey Decimal System tool as a present. It's hanging in my office in Höganäs now, although we use the SAB-systemet in Sweden.

Rose died in 2011 and we moved to Sweden shortly after. I gave birth to my surprise twins in 2012 (Rose was also a twin, so I still think of them as her parting genetic gift to me), I was home with my children and learned Swedish and finally landed this job in Höganäs in 2016. It is a vikariat position, ie. a maternity cover, so it's not a permanent job, but it's a pleasure and an honor to work at a library as lovely as Höganäs stadsbibliotek, so I'll take whatever I get.  Permanent jobs as a librarian are hard to land in Sweden, probably because they are indeed such lovely luxury jobs, so there's very little movement on the job market. I do have a permanent job at a wonderful local school that I'll be returning to when this maternity cover is over, as a fritidspedagog, which is roughly equivalent to a programming/after-school librarian, but I will cover that on a later blog post. I feel happily rewarded in both jobs and I am grateful for both!
Posted by A.Johansson at 5:23 AM 2 comments:

After a 6 year (omg!) hiatus, the Escape Archivist is back!

I'm baaaaack! After my 6 year blogging intermission, I am back. And now broadcasting to you over the blogwaves from southern Sweden, Höganäs, to be exact.

After our adventures in La Paz, Bolivia, El Sueco and toddler M (now almost 8-year old M) have moved to El Sueco's homeland, Sweden in 2011. Since 2011, our family has grown and I now have 2 more M-lings. They are 4 years old. Yes, they are twins. So in the intervening years (I love when narrators say this in films, sounds so dramatic), I have given birth, become professionally fluent in Swedish, and have managed to get a job as a children's librarian at a lovely little public library in the area where we live. 'Tis a wonderful life!

Currently, I am sitting in my office and adding some newly received books to our library catalog. Later, I will have a shift at the reference desk (infodisken). I look forward to sharing insights on life in Sweden as a librarian.
Posted by A.Johansson at 2:28 AM No comments:

One month down, one to go

As of September 24th, I have been at my position for one month. I am funded for 1 more month, though I think that it might be possible to extend the funding and appointment. Overall, I have enjoyed both my job and my life in this country. The job market back at home is not exactly beckoning with possibilities, so it is entirely possible that The Escape Archivist will continue to find work abroad. I have received many emails regarding my "escapes" and how to create them. My general advice for finding work abroad is to RESEARCH, RESEARCH and do more RESEARCH. If you are a librarian, doing complete and thorough research should be a natural reflex, though it surprises me how many terrible researchers I have met in library school and in practice at various New York library reference desks. Of course it also helps to be able to read (even better to speak AND read) foreign languages. I can read 7, which I guess helps increase my job possibilities. Moreover, be openminded about foreign cultures. Not everywhere is America, and not everybody speaks or understands English. And sadly, there are plenty of people who will judge you harshly at the outset simply for being American. It is your job as the expat to be respectful of your host culture and to go with the native flow (it´s MUCH harder if you try and impose your standards to the ones in your host country) and just.be.cool. I´m currently funded by the US Embassy, and I take that fact seriously. While some Bolivians may dislike certain American international policies, they are open to respecting our personal and cultural contributions to their country. Likewise, I love learning more about their rich culture and history.
Posted by A.Johansson at 8:34 AM No comments:

Sort of the patron saint of La Paz